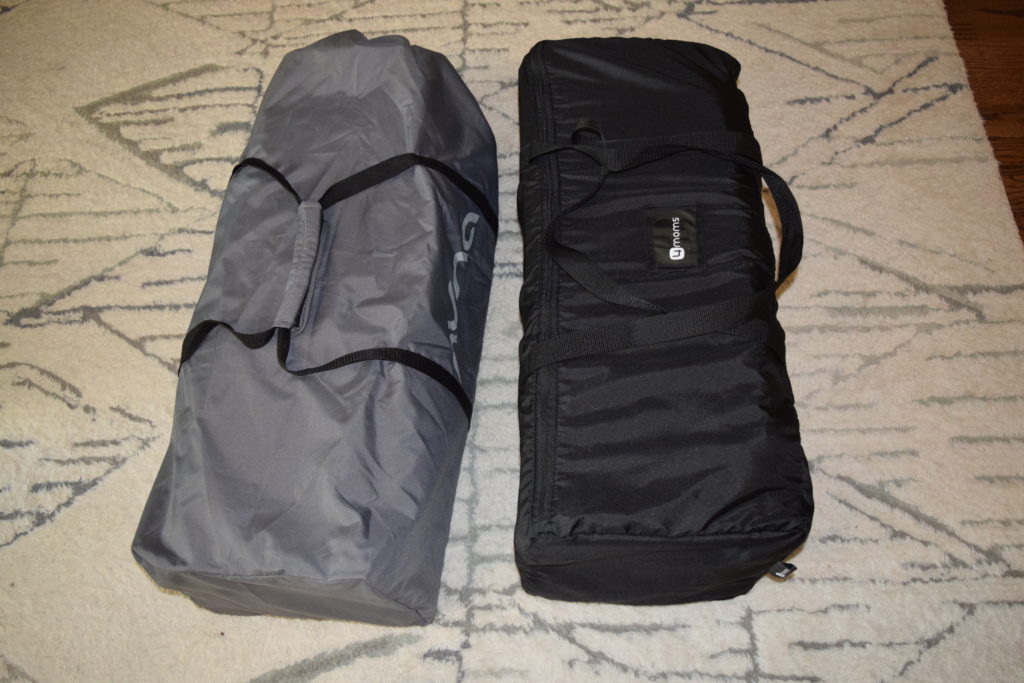 First of all, we must note we’re deeply confused about what to call this category of baby product – playard (wait, why isn’t it a play yard?), pack ‘n play? Travel crib? We’re just not sure who names these things or what the logic is here. Obviously, you can use them for a “yard” for your baby to play in that’s safely enclosed to keep your baby away from dangerous stuff … but mostly we’ve used them a travel version of a crib – a safe place for your baby to sleep at night, and for naps.

Ok, sorry, had to get that out of the way.

Secondly, please note Fathercraft is reader-supported, meaning, at no cost to you, we may earn a commission if you buy after clicking an affiliate link. More on our policies here.

Our Nuna Sena Aire review, and our 4moms Breeze review – a showdown in the desert

Recently, the Fathercraft crew took a trip to Moab, Utah, to do some hiking. With us, we brought a 9-month-old and an 18-month-old. This seemed like a great place to test two pack ‘n plays head to head. Truthfully, it had nothing to do with the desert but, you know, sounds cooler that way. Instead, it had to do with 2 young kids in an Airbnb with two sets of parents to test travel cribs and compare notes.

We brought two playards (ok, we officially hate that word – last instance of it) with us – the Nuna Sena Aire (Nordstrom) and the 4moms Breeze Plus (Amazon). Both of these had received top ratings in our online research, and neither of them was manufactured by Graco, which was important because a Graco pack ‘n play had nearly reduced me to tears on more than one previous occasion when I was trying to set it up for a really tired baby and just couldn’t make it happen. Our goal: understand what was the best pack ‘n play out there.

We’ll start with some basic stats, dig into comparisons of each across a variety of features and functions, and end with some final thoughts and a winner.

For this trip, we drove with the Sena and the Breeze Plus from Denver to Moab, after having got both cribs out in Denver to test them out and give some naps. Here’s how they compared from a packing perspective:

Both of these travel cribs are remarkably easy to set up, especially compared to our experiences with Graco. From packed, you unwrap the bundle, push down on the point that will be at the center of the crib’s mattress, which forces the thing to expand until, with a satisfying finality, it’s fully standing. Then, you put a sheet on the crib mattress and place it into the crib. Finally, you secure the mattress to the underside of the crib with some velcro straps. This does involve some manipulation with each one, but these things are light enough you can put them on their side to do this if you want.

If you’re thinking, “well that sounds like what I’d expect” you haven’t owned an older Pack ‘n Play.  The older Graco we’ve used involved trying to lock each individual side while trying to keep the middle from collapsing and trying to remember which sides you needed to lock first – the long ones or the short ones.

The only real difference in setting up the regular part of these two is the sheet. The Nuna Sena’s sheet is included, and includes velcro near its fitted edges, which needs to be aligned with the velcro on the underside of the mattress for added security. It’s also worth noting that while the Sena comes with a sheet, the 4Moms sheet is sold separately for $39.95, which seems like a lot to us, though it is waterproof to protect the mattress, Sena’s sheet is not (though the company does note the fabric on the Sena is water resistant).

The place you do start to notice a difference with these two travel cribs is with the addition of the bassinet/changer. If you’ve never used a travel crib before, this would be a good time to let you know that the regular mattress in a travel crib is close to the ground, and sides are tall. And this can make the act of bending way down to reach a baby who’s not yet sitting or standing a real pain.

The 4Moms Breeze Plus features a side-by-side changer/bassinet combo that brings your infant much closer to the top of the crib’s sides. Here’s what we’ve got to say about that:

The Sena Aire, on the other hand, features a contraption that elevates the crib’s mattress (you use the same mattress) to about half its normal depth within the crib. As we discuss in the conclusion, this makes it practical, and more safe, to use for slightly older babies (though you still wouldn’t want to be using with a baby who can sit or pull up.

The major downside to note here is installation. Unlike the Breeze, which snaps on in a matter of seconds, installation of the Sena’s bassinet involves securing 8 combination buckle and snaps, all done underneath the rim around the top of the sides. I really struggled to do this, but it did certainly make me feel like it was securely attached when it was finally on.

Taking down a travel crib is almost always easier than setting up, and these two are no exception to that rule.  To take them down is the exact opposite of setting up, and similarly easy to do. Once the mattress is removed, you pull on a strap in the middle of the crib that easily folds it back up, and can be done one-handed.

Both of these travel cribs had similar mattresses – they fold in 4, include some level of padding (actually more than a traditional crib mattress – we presume to make them more comfortable for older kids. And while we can’t comment about compliance with the AAP’s “firm mattress” guidelines, both manufacturers note they’re suitable for use from birth.)

The 4Moms mattress notes it’s cleanable with a damp cloth, while the Nuna Sena’s mattress has a cover that zips off and can go in the washing machine. It may be because of this difference that 4Moms sells a waterproof sheet while the Sena’s sheet is not.

A difference in the sheets is that the Sena’s sheet velcros to the bottom of the mattress and is labeled as being made with organic cotton.

Again, these two are quite similar. They both feature fine mesh sides for breathability and to prevent baby fingers, etc from getting caught. Both mattresses fit snugly against the frame to prevent a baby from potentially becoming trapped at the seams.

Both of them also feature sleek, modern designs that won’t create an eyesore if left in parents’ bedrooms or living rooms for long periods of time, though we’d argue the 4Moms is slightly sleeker.

Both even feature their own unique, potentially silly accessories – you can purchase an insect net for the Sena Aire (Nordstrom), and a diaper caddy that attaches to the Breeze Plus.

Each of these travel cribs also sells variations. Nuna sells a Sena Aire Mini (Nordstrom), which is about 10% smaller and weights 6.5lbs less than the Sena Aire for an MSRP of $199. 4Moms sells the Breeze Go (Amazon), which isn’t actually any smaller than the Breeze Plus, but skips the changing pad and bassinet, isn’t quite as sleek looking, and retails for $100 less.

The Sena and the Breeze Plus, since they don’t include the same accessories, can be a bit tricky to compare from an “all-in” price perspective. So, we created this handy comparison chart:

It’s worth noting that the 4Moms Breeze collection includes a “Breeze Go” for $199.99 that’s smaller and doesn’t include a bassinet or changer, and a “Breeze Classic” that forgoes the changer and costs $249.99. And Nuna makes the Sena Aire Mini (Nordstrom), which is a smaller version of the Sena Aire, for $199.95, which they also market as doubling as a bedside crib. Sena sells additional sheets for the Sena Aire (Nordstrom) for the same price a 4Moms sheet will run you – $39.95

Alright already, which one should I buy?

Now that we’ve gone into exhaustive detail, the question might remain – which one should I buy? The answer, we think, is “it depends”.

Overall, these two are pretty darn similar on many fronts (and as we’ve noticed, a significant leg up on their competition.) We tend to like the 4Moms just slightly better from an ease of use perspective, and due to the fact it’s slightly lighter and has a better travel bag. But, there’s a question of what you’re going to use it for. If you’re looking to use one of these less as a travel crib and more as an in-home (or in grandparents’ home) option from birth, the Nuna Sena’s bassinet is more practical to use as your baby gets slightly bigger and you’d no longer be comfortable using the 4Moms’ bassinet function. And if the thing is going to be a semi-permanent installation in your house, the pain of setting up the bassinet is one-time.

For Nuna products, we like Norstrom.com for the fast, free shipping, great customer service and ease of returns. If you’re intro the Nordy Club (Nordstrom rewards program) like both of our wives, these projects can earn points toward that.

4Moms stuff is available on Amazon, and part of Prime:

So, we hope that helps make your decision clearer. If you’d like to learn more about our top baby gear choices based on years of research, check out our baby essentials list. 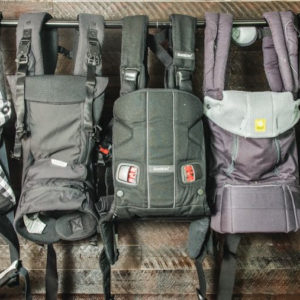 The best baby carriers of 2022

From bouncy seats, play-n-packs, strollers, and bassinets, when you are a new parent, you are not only committed to your child, but also a whole lot of stuff everyone

If you are a new parent, at some point you probably wish you could grow another arm or two just to get everything done. You have more stuff to

Wagons for kids have come a long way since the days of the stamped steel Radio Flyer wagons, which also doubled for yard cleanup and likely dragging other hapless