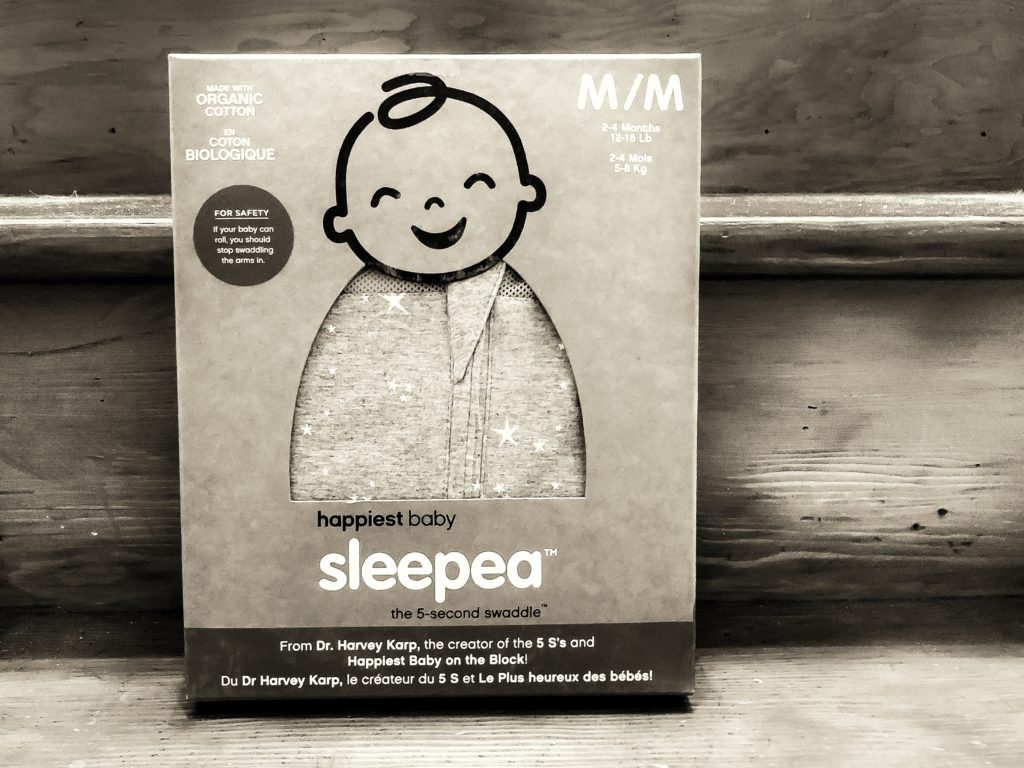 For this Sleepea review, we spent 30 days with the Sleepea swaddle (sleep sack) from Happiest Baby. We’ve also compared Sleepea to a number of other sleep sacks we’ve tried. To start, here’s a one-minute video on the Sleepea:

In this Sleepea review, we’ll explain how Sleepea works, offer some observations based on spending 30 days with it, and provide the awesome, the wish it were different, and a verdict.

Editor’s note: Fathercraft is reader-supported, meaning, at no cost to you, we may earn a commission if you buy after clicking an affiliate link. Learn more.

What’s a Sleepea? How does it work?

The Sleepea is a sleep sack, manufactured by Happiest Baby, a company known to many as being founded by Dr. Harvey Karp, whose “Happiest Baby on the Block” video demonstrates the 5S’s of sleep for newborns. They also created the Snoo, a robotic bassinette, which we review here. The point is, this is a company that knows sleep.

The Sleepea is essentially a part of the Snoo system (the Snoo Sack) that is now being sold as a standalone item. Sleepea is just like the Snoo Sack, except there are no clips that attach it to the Snoo, it’s got clips to release an arm (for older babies), and different colors.

We talked about our experience with the Snoo Sack in our Snoo review, and it was very positive. That review was done by Paul with his daughter Ruby, who was less than a month old at the time. This review was conducted by John, with his son Calvin, who was 3-4 months old during this review.

To use the Sleepea, you lie your baby down on top of the Sleepea, use Sleepea’s “smart inner band” to gently but firmly pin your baby’s arms against his body, and then zip up the Sleepea over your child’s feet, legs, body, torso, and right up to his neck. Sleepea comfortably rests under the baby’s chin.

If you’ve used a sleep sack of some kind before, Sleepea will feel pretty familiar, with a couple of notable differences:

Sleepea also includes a number of other features, some of which are found in various combinations elsewhere: it’s billed as incredibly easy to use, produces a consistently perfect swaddle, is made from organic cotton, zips from bottom in addition to top to facilitate easy middle-of-the-night diaper changing, and includes extra room in the hips – allowing a baby’s hips to relax while sleeping is important to development.

Having tried numerous sleep sacks, I was excited to try out the Sleepea, purely based on reputation – after Paul’s review of the Snoo and Snoo Sack, I’d gained serious respect for Happiest Baby products. The first thing I noticed about Sleepea were some obvious differences from other sleep sacks – the mechanism for pinning a baby’s arms being inside the sack, the much lighter-weight materials and mesh panes vs other sleep sacks billed as being “cozy” or “fleece material for warmth.” These differences were slightly disconcerting at first but backed up by really sound logic, research, and expertise.

Sleepea’s lightweight materials and mesh panels were the most worrying – I thought Calvin might be too cold, especially since I’d previously been using the Halo SleepSack, which is made of a fleece material. After Paul described the ear test Happiest Baby had previously taught him (feel a baby’s ear – if it’s cold, they’re cold, if it’s warm, they’re hot, if it feels normal, they’re just fine), I was much more comfortable and realized Calvin wasn’t cold at a normal room temperature (70 degrees for us.)

The ease of getting Calvin into the Sleepea depended a lot on him, and what position I was putting him in. If I wasn’t strapping his arms down (he didn’t like that as he approached 4 months) it was literally the 5-second swaddle it’s advertised as. On a perfect night, when he was basically already asleep, using the smart band to strap his arms down and then zipping up also 5 seconds. If he was awake, and I was fighting the arm battle, it took a good deal longer than 5 seconds, and was tricky to do, as I had to use one hand to hold both of his arms down and try to manipulate the smart band with one hand.

Once Calvin was secure, the smart band did keep his arms in, and having the band on the inside of snack seemed to provide a double layer of protection that prevented him from getting arms out vs other sleep sacks where wings, and arms, are on the outside.

The perfect ‘snugness’ – Sleepea’s smart band and zippered enclosure felt “snug” not too loose, not too tight. This was definitely an improvement over some other sacks I’ve tried and wondered whether I had the tightness correct.

Stays secure, doesn’t get too close to neck and head – Sleepea’s snug zippered closure that comes right up to the neck and lack of “wings” outside the snack meant it couldn’t “sneak” up and cover Calvin’s neck or face. This was definitely in contrast to other sacks I’ve tried that can sneak up, or feel like the neck is getting bunched up and too tight.

Dual position – arms pinned or free – Calvin, as he approached 4 months, didn’t seem to like to have his arms strapped down, so it was nice to have the smart band that can strap arms down, or if your baby is ready to have arms freed, you just be put the band around body. Calvin is a wiggler, so this is nice. Even when he wiggles his arms free, he isn’t pulling it up over his face, and I didn’t have to worry about it covering his face and increasing SIDS risk.

The double zipper – was really nice for diaper changes – makes it much easier to change Calvin while he was sleeping, without going through the hassle of completely extracting him from the sack (though this feature certainly isn’t unique to Sleepea.

The Wish it Were Different

Getting your baby into Sleepea – for a swaddle billed as a “5-second swaddle”, getting Calvin in left a little to be desired. It was easy enough to lay him down on top of it and get his legs in. Strapping his arms in was more difficult – trying to use one hand to pin arms down, get the smart band on with one hand was challenging at times. Trying to do it in the dark when I couldn’t see if I was doing was nearly impossible. With “winged” sleep sacks, the wings are a lot longer and wider, so you’re tucking it around and underneath, making the experience closer to the experience of a swaddling blanket, and easier to do. (I’ll note again that Calvin was able to pull the “wings” of winged sleep sacks I tried up over his face, so the extra effort of getting him in was worth it for safety’s sake.)

Quiet velcro was a dubious claim –  Happiest Baby advertises the velcro on Sleepea as “quiet velcro”. After a month of use and a very unscientific test of Sleepea’s velcro against another sleep sack, it was maybe quieter than normal velcro, but definitely not quiet. So, we’d call quiet velcro a rather dubious claim.

Snaps to release arms weren’t obvious – this is maybe more a note to those of you who, like me, don’t tend to read instructions. I didn’t realize there were snaps near the shoulders of Sleepea to let Calvin’s arms free when I was ready to stop pinning his arms. I left Calvin’s arms inside the sack, and one ended up coming out the neck hole by morning. After realizing the snaps existed, things made a good deal more sense.

Based on our experiences with Happiest Baby over the years, through Dr. Karp’s 5s’s, then Paul’s experience with the Snoo, we really trust this company here at Fathercraft. Sleepea made me feel like we were using an incredibly well thought-out and manufactured product, designed with my child’s safety at the very top of the product’s priority list. Some of the claims made by Happiest Baby, as noted in the “wish it were different” section, seemed a bit exaggerated, and there were moments of frustration trying to get Calvin into the Sleepea, but overall this is an excellent product, and we highly recommend it. (And we’re not alone in thinking the Sleepea is awesome, it’s got an average rating of 4.1 stars based on over 600 verified reviews on the Happiest Baby site.

Based on our review, our experiences with other sleep sacks we’ve tested, we’ve added the Sleepea to our baby essentials list, which details all the must-have baby gear for your baby, plus a few surprises.

Sleepea is available on Happiest Baby’s site for $27.95, though it sometimes goes on sale for less.

And, as of February 2020, it’s available in a variety of colors (pink, grey, blue, and green) and two patterns: a stars theme and what we assume, as the illustrations are a bit abstract, is a space theme with asteroids and ringed planets.

Editor’s note: this review was originally published in March, 2018, but was updated in February 2020 with new information including updated pricing, and star rating for verified reviews.

IMPORTANT NOTE: in late 2021, Owlet received a warning letter from the FDA regarding the misclassification of its Smart Sock as a medical device. It’s worth noting this warning

The Molekule Air Mini+ is smaller than I expected. Given the name, perhaps this shouldn’t have been surprising. It’s a good thing. It sits nicely on a dresser or 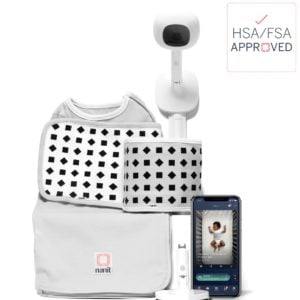 Well, holiday shopping craziness is here. And it’s 2021, which means … well, we don’t need to go into that. But the good news is that instead of standing