When parents first hear the phrase “Woombie”, it sounds a lot like a wobbling toy or perhaps a toddler television show. In reality, it refers to a large line of stylized swaddling sacks for infants, from a company with the same name. The name comes from the idea of making babies feel comfortable and comforted by a snug, conforming sack, like they did in the womb while still keeping them sleeping safe and sound on their backs in a crib. Before getting fancy with any of the new Woombie variations, John and baby Calvin tried the Woombie Air – one of the simpler variations in the Woombie line – to see how it stood up to other brands and styles of swaddling sacks. Note: if you’re considering a different version among the Woombie’s MANY variations, fear not – Woombies share most of the same characteristics, so this review will get you most of the way to understanding whatever one you’re considering.

Let’s jump in with a quick video of how the Woombie works and some of its features:

For parents of newborns and growing infants, finding the right swaddling solution can be a challenge, due to the sheer variety of options available, and individual needs, sizes, shapes, preferences and movement patterns of different babies. Some are more or less sensitive to the ‘snuggle’ factor, and some are escape artists that must be secured with any safe and comfy method possible. Let’s just say that Calvin is a notorious wiggler and we learned early on that traditional swaddling blankets just weren’t going to pass muster.

This led us to an adventure in swaddling sacks, cozy cloth baby-style sleeping bags made to fit snugly around an infant. The idea is for Calvin to feel held and snuggled and to keep him still at night, like a swaddling blanket, but without the constant origami and the risk of loosening, escape, or material that covered his face at night or during naps. (Most experts believe babies sleep more soundly when swaddled as they don’t startle themselves awake, and it’s critical not to have bedding, blankets, sacks, or otherwise covering a babies face from a SIDS risk reduction perspective. We discuss further here.) Our first swaddling sack that we reviewed, the Sleepea from Happiest Baby, was quite the success so we decided to try the Woombie Air and see how it stood up in comparison.

In this review, we’ll let you know what was awesome about the Woombie Air, what I wished was different, and the final verdict for me and Calvin.

What, Exactly, Is a Woombie Air?

A Woombie Air is exactly what it sounds like – a model within the Woombie line that features light, breathable fabric. (Note we tried this model because of our belief that many swaddling blankets are too warm for kids – more about that in our Sleepea review.) The idea behind the Woombie is that it makes babies feel comfortable and held in the same comforting way they felt in the womb. In practice, it’s a zip-up jersey sleeping sack that conforms to a baby’s body, with extra room in the hips to allow a safe sleeping position.

The Woombie company is particularly proud of its “ergonomic” form-fitting shape made to not only hold your baby in a cocoon, but to provide a tight snuggling sensation at just the right points while allowing their legs to wiggle as babies often enjoy doing. In specific, it has a narrower waistline that changes the appearance of your swaddled baby and comfortably compresses their tummy along with a hip and shoulder friendly design.

According to the company, the Woombie’s shape will keep the baby’s hands away from their face and promotes self-soothing by allowing the baby to cuddle themselves in what’s described as a “hands over heart” method inside the swaddle. The company announces that their seamless fitted design and breathable fabric moves with the baby “mimicking the womb-like environment”. In theory, it can even be used partially zipped with an ‘arms out’ position in swings and strollers.

And like many thoughtfully designed sleep sacks, it zips down from the top for baby release and up from the bottom for quick midnight diaper changes.

The Woombie has a lot of good reviews from other parents but, let’s dig into its performance with Calvin, and provide a multi-point comparison with the Sleepea.

After our experience with the Sleepea swaddle, which we reviewed not long ago, we were excited to try a few other highly-rated swaddling sack styles because Calvin is pretty hard to keep still when we’re settling him down at night or for a nap. An inveterate wiggler and escape artist, we were delighted by the fact that the Sleepea managed to hold Calvin’s arms tight to his sides through the night and the first thing we noted about the Woombie Air is that an internal band (or any arm binding) is not part of the design – a child’s arms and hands are free to move about inside the snug environment. In practice with Calvin, this resulted in a lot of movement inside the sack.

That said, compared to the Sleepea and other designs of swaddling sacks we tried, there’s nothing all that special about the Woombie. It’s made of normal cotton-jersey style material that is not too heavy or too light and is very spartan in both design and functionality. No particular feature stands out other than the form-fitting shape and the fact that it only took about five seconds to get Calvin in or out of the Woombie. The company seems to feel the need to make up for this lack of features with a plethora of colors and designs. There are twenty listed on the company’s website at the time of this writing, and Amazon has dozens of options – so many they’re bucketed into girls, boys, different themes, etc.

Body-fitting snugness, no extra straps – The number one best thing about the Woombie is that its form-fitting design is built to hold your baby in place without any additional straps, wings, clips, or other hoopla. Note while this is great for getting kids in quickly, with Calvin it resulted in him wriggling the Woombie’s material up around his face.

Zips both ways, easy diaper changing – Diapers don’t stop needing changing just because your baby’s trying to sleep. The ability to zip open the Woombie from the bottom made it convenient to change Calvin’s diaper when he’d rather keep sleeping so we don’t have to get him all the way out of the sack, though worth noting this feature wasn’t unique to the Woombie.

Simple design, easy wrapping and removal – While the simple design leaves something to be desired in terms of features, it definitely speeds up the time it takes to get Calvin in and out of the swaddle. One zipper with no clips or wings means that wrapping and removing this sleep sack is very simple and fast.

The Wish It Were Different

Rides up around neck, risk of covering mouth – The biggest problems we had with the Woombie Air was one that I’ve worried about a lot with both traditional swaddling and sleep sacks. It seems like a lot of fabric rides up around Calvin’s neck and shoulders, increasing the risk that cloth might cover his mouth while he sleeps. This is pretty serious SIDS concern.

Hands moved a lot, wound up near mouth – Unlike the Sleepea and other models that secure the baby’s arms, the Woombie advertises loose area for arms so babies can snuggle themselves. However, with a wiggler like Calvin, we found that his hands almost always wind up moving toward his mouth, bringing back our concern from the first con.

No option for free arms as baby grows – As a baby gets older they want and need more freedom in their swaddling – to suck a thumb, or just generally move arms around. The Woombie doesn’t seem to account for this (they mention a hands-free position for strollers and swings, but it seems that just means not zipping it up all the way) and we couldn’t free Calvin’s arms for partial swaddling the way we could with the Sleepea.

While we’ve generally been comparing the other sleeping sacks to our great experience with the already-reviewed Sleepea Swaddle, let’s look at specifically how the Woombie’s design compares feature by feature.

The Sleepea was more snug – Despite the fact that the Woombie advertises being perfectly shaped to hold a baby snugly from shoulders to knees, we found that the Sleepea was actually more effectively snug and comforting than the Woombie

No breathable mesh panels – Another feature that would have been easy to add is the mesh panels at the shoulders and knees to allow comfortable ventilation through the sleep sack. This was also missing in the Woombie, which is solid jersey fabric.

Really liked the Sleepea internal armband – After trying both the ‘fitted’ and arm-band style swaddle sacks, we definitely prefer the internal armband of the Sleepea. You don’t have to use it if you don’t want to but it really helps keep a wiggly baby like Calvin secure and safe.

No snaps to free arms as baby gets older – Finally, the Sleepea had little snap-open armholes at the shoulders to allow older baby’s freedom to move their arms in the night while still remaining comfortably swaddled from neck to toes. The Woombie doesn’t have this feature either.

One big “Meh” from John and an indifferent wiggle from Calvin. The Original Woombie may be better than swaddling blankets, but parents should go for a sleep sack that has more than a single middle-of-the-road feature. Overall, I would definitely recommend the Sleepea over the Woombie to any parent, wiggly baby or otherwise.

Editor’s Note: we are a participant in the Amazon Services LLC Associates Program, an affiliate advertising program designed to provide a means for us to earn fees by linking to Amazon.com and affiliated sites. You can learn more about our policies regarding affiliate links here. 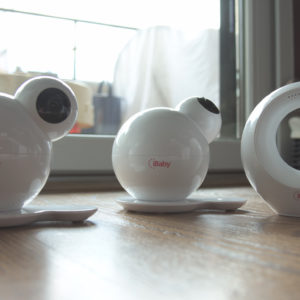 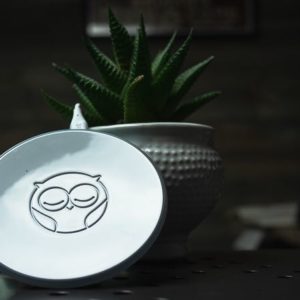 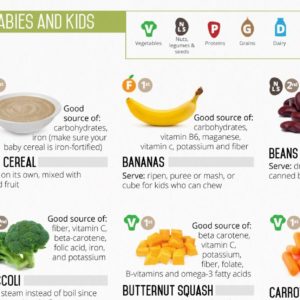 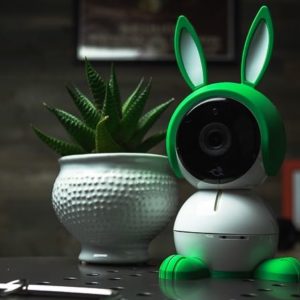 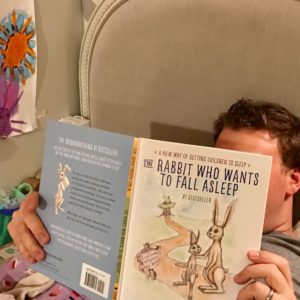 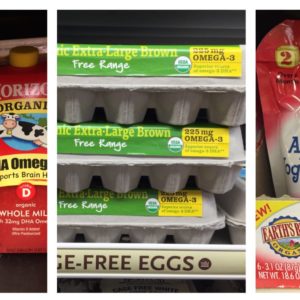 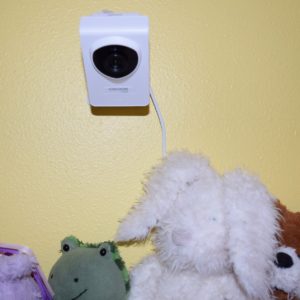 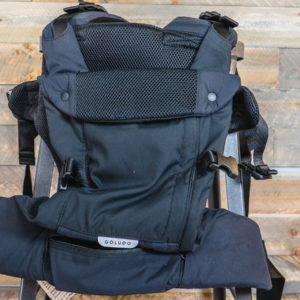 Speaking of bells and whistles, many of the baby monitors on the market today have an astounding number of additional features. And, based on our testing, there’s a fairly even split between features that serve a real need and features that just aren’t particularly useful.

As we’ve said before about other baby-related products – if you use it in the middle of the night, it damn well better be easy to use. As monitors add more bells and whistles, it becomes harder to have a logical, intuitive user experience.

Most monitors with a dedicated parent unit constantly have an open audio channel – meaning as soon as your child makes a sound, you’ll hear it in real time. However, with wifi baby monitors we reviewed, a constant audio feed isn’t a given as the monitor app often gets relegated to the background when you do other things on your phone or tablet. So, having a rock-solid alert system or process for creating a constant audio feed is an important issue any wifi monitor needs to solve.

We’d argue that sound quality and sensitivity are more important than picture quality. After all, you aren’t going to be constantly staring at your child through the monitor (hopefully sometimes you’ll be sleeping, too) so being able to hear your child clearly is hugely important.

Seeing your child is a critical part of the function of a baby monitor, and picture quality in monitors can vary widely. We include night vision as part of the picture quality discussion since your baby will (and should) sleep in a dark room, at least a large portion of the time.

If you don’t have a strong enough signal that you can clearly and consistently connect to the child unit located where your child is sleeping, your monitor is useless. We’ve used a number of monitors with our own kids where the range of the monitor was a major issue, even in smaller houses.